The non-stress test (NST) and contraction stress test (CST) are two tests which use cardiotocography (CTG) to measure how the foetal heart rate (FHR) changes in response to foetal movements and oxytocin-induced uterine contractions, respectively.

If the water has broken (physiologically or due to amniotomy), the foetal heart rate electrode can be placed on the foetal head through the vagina. This is used for intrapartum monitoring.

Cardiotocography may be used for multiple purposes:

On the CTG, there will be a baseline foetal heart rate. Physiologically, the heart rate should show considerable beat-to-beat variability from the baseline, i.e. the heart rate should oscillate between higher and lower frequencies with each cardiac cycle. This is called short-term variability and is much more pronounced in foetal hearts than developed hearts. This makes the healthy FHR trace more of a jagged line than a straight line, as it would be in adults.

Long-term variability refers to changes in the FHR which last for multiple cardiac cycles. This includes accelerations and decelerations, and occurs in relation to uterine contractions or foetal movement.

The foetal baseline heart rate should not be too low or too high. The normal range is 110 – 160 bpm.

A normal ECG will also show accelerations, which are short periods where the foetal heart rate is increased compared to the baseline, after which it returns to the baseline. Accelerations are physiological responses to physical activity, such as the foetus moving, as well as uterine contraction. According to the definition, it only counts as an acceleration if it lasts more than 15 seconds but less than 10 minutes, and if the increase in heart rate is > 15 bpm compared to baseline. 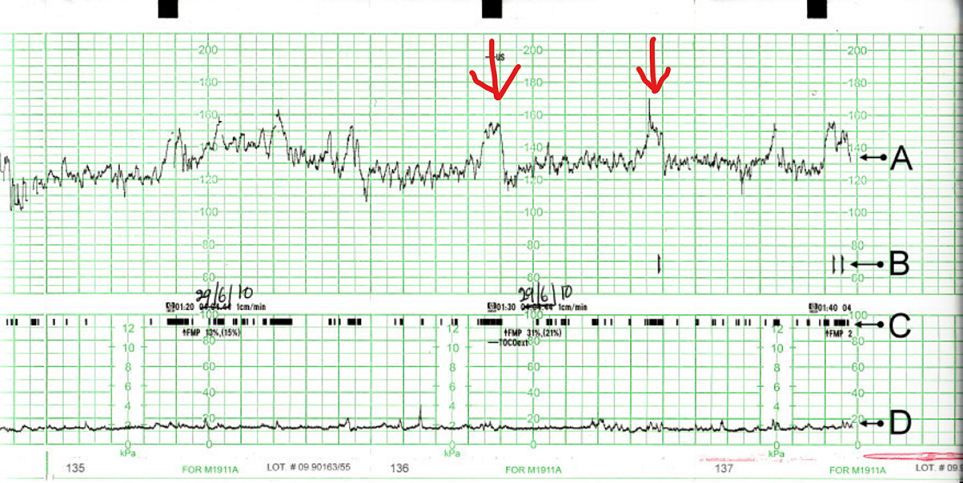 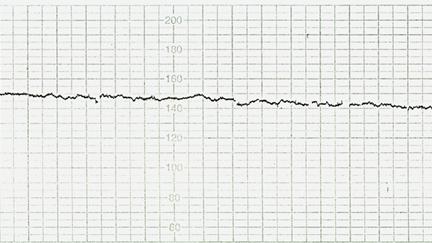 A CTG with absent FHR variability, both short-term and long-term. From http://eknygos.lsmuni.lt/akuserijaen/Obstetrics/4%20CTG%20engl.html

Presence of any of these findings on CTG is worrying for the foetal status and should prompt intrauterine resuscitation or immediate delivery. If the variability is absent, the CTG is preterminal, meaning that the foetus is in a preterminal state.

STAN requires the electrode for the foetal heart rate to be placed on the foetal head (i.e., the membranes must have ruptured), so it can only be used during labour and not during NST or CST.

During STAN, the machine will continuously analyse the foetal ST segment for elevation or biphasic ST-segment and can give a notification if abnormal.

As already described, the nonstress test (NST) is a test of foetal condition which uses cardiotocography to describe how the foetal heart rate changes in response to foetal movements. The test must last for 20 minutes to be conclusive.

The main use of NST is to rule out foetal abnormality in high-risk pregnancies in an outpatient setting. NST should not be used to screen healthy women with seemingly healthy pregnancies (although this is still performed sometimes). To avoid unnecessary procedures and interventions, low-risk pregnancies should not routinely undergo NST.

Rather than talking about physiological or normal NST, we say it’s “reactive”. An NST is reactive if 2 or more accelerations are seen during the 20 minutes. A reactive test means that there is a low risk for foetal acidosis, and it can be reasonably concluded that the foetus is oxygenated normally.

The test is nonreactive if < 2 accelerations occur. This may be a sign of abnormality and should prompt further investigation. A nonreactive test means that there is an increased risk for abnormality in the foetus, but it can also be due to the foetus sleeping. In case of a nonreactive test, vibroacoustic stimulation should be performed to rule out sleeping as a cause. This involves a device which is placed on the maternal abdomen and produces vibrations and sound.

Of course, if any of the pathological findings detailed earlier are present, the test is abnormal and immediate measures must be taken. However, these findings are more frequently seen during birth or maternal illness, and are rarely seen in the setting in which NST is performed.

Also called oxytocin challenge test (OCT), the contraction stress test (CST) is similar to the NST but involves giving IV oxytocin to stimulate uterine contractions. This test is often performed if the NST is non-reactive.

Despite NST and CST being widely used, there is no good evidence that they actually improves any endpoints of value (perinatal mortality, number of C-sections, etc.)