Deamination refers to the process where base loses an amino group. This happens spontaneously at a rate of approx. 100 times each day in a cell. Because an amino group is the only the only difference between some bases, deamination can turn a base into a whole different one. 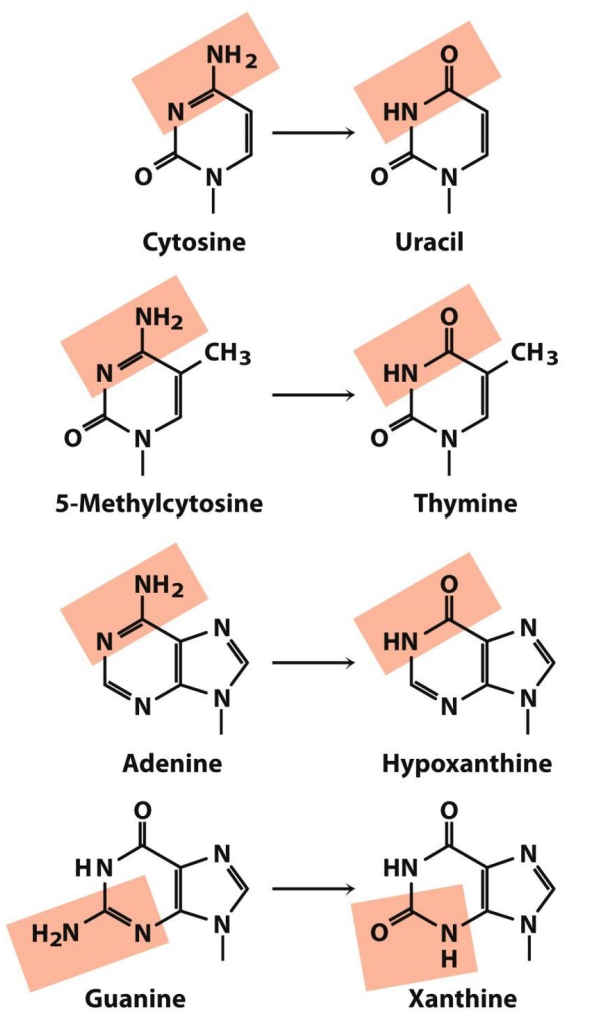 Deamination of cytosine yields uracil (see the figure above). If this happens in RNA, some information is lost, as a base is switched out with a new one. In DNA, which doesn’t use uracil (but uses thymine instead), the DNA strand can break.

Depurination is a similar process, where a nucleotide in DNA can spontaneously lose its base, to yield an apurinic residue. This happens more often than deamination, approx. 10 000 times each day in each cell. On this figure you can see what happens during depurination.

UV light can induce formation of pyrimidine dimers. If two pyrimidine bases are next to each other in DNA, and they are exposed to UV-light, the two bases can form a chemical bond with each other, creating a dimer. Such dimers introduce kinks in the DNA strand, which is obviously not good.

Ionizing radiation and free radicals can cause breaks in both DNA strands, so called double-stranded DNA breaks.

When DNA damage like pyrimidine dimers are detected, we need ABC excinuclease to remove the damaged fragment. DNA helicase is also needed, as seen on the figure. Then DNA polymerase I or ε fills the empty space, and DNA ligase implements the newly synthetized DNA fragment into the strand.

This type of repair functions similarly to nucleotide-excision repair. We have a case of a damaged base which DNA glycosylate removes. Now that we have removed the base (but not the whole nucleotide), we are left with an apurinic or apyrimidic residue (a nucleotide without its purine or pyrimidine base). AP endonuclease creates a nick, which DNA pol I fills in, and DNA ligase fixes.

Let’s say that DNA polymerase replicated DNA, but made one mistake. The new strand is error-free, except at one place, where there is now a C where there should have been a T. There is now a mismatch, because the original strand had an A at that spot (so the newly synthesized one should have a T), so the C is obviously misplaced. This obviously has to be fixed, but how does the reparation machinery know which strand is the original, correct one, and which is the newly synthesized one with the error?

All DNA is methylated to some degree. Many bases along the DNA molecule has extra methyl-groups attached to them. After DNA replication, the new strand needs to be methylated in the same way as the original is. However, this methylation does not occur immediately after DNA replication – so the newly synthesized strand isn’t methylated right after it is synthesized. This means that the repair machinery has a small window of time (a few minutes), where it knows which strand is the original one (the one that is methylated), so it can fix the other one.

On the figure above, you can see the mismatch in the middle of the strands. The blue strand is the original (because it’s methylated), and the red is the new one, which has to be fixed. The Mut-complex binds to both strands at the site of the mismatch, and then goes along both strands in each direction, making a loop in the DNA.

When the Mut-complex reaches a methyl-group, it knows which strand is the original, and makes a cut on the non-methylated strand, at the site where the other strand is methylated. Now that there is a nick in the new strand, exonucleases can remove every nucleotide from the nick, back to the mismatch, which DNA polymerase III can fill in.

After every mismatch like this has been fixed, Dam methylase will methylate the new strand to be equal to the original one, and the two strands are now undistinguishable. There’s no way to know which one was the original now

As discussed earlier, bases can be methylated by certain chemicals called alkylating agents. When bases are methylated, they can turn into other bases, which will cause a loss of information in the DNA.

Let’s say there is a guanine in the DNA strand. On the other DNA strand, a cytosine is bound to this guanine. If this guanine is methylated, it will become an O6-methylguanine. This base pairs with thymine, and not cytosine, so a mismatch has now occurred, but it cannot be fixed, because both strands are methylated. The mismatch will stay until the DNA is replicated. When it is, the two strands will be separated, so one strand will have the O6-methylguanine while the other has cytosine. When the first strand is replicated, the new strand will contain a thymine, while when the second strand is replicated, its new strand will contain a guanine. Now we have two different DNA molecules, which is bad.

This is repaired by direct repair, which means that the bases are fixed, and not removed and replaced.

Another enzyme that can fix base methylation is AlkB. It needs α-ketoglutarate and Fe2+ to work.

Pyrimidine dimers can be directly fixed by DNA photolyase. This needs FADH2. It doesn’t occur in humans.

What happens if DNA damage happens at both strands at the same time? Then there’s no template to regenerate DNA from. There are to repair mechanisms in this case

The easiest solution is to just join the two broken ends together, which is called nonhomologous end joining. Some nucleotides may be lost at the site of joining, however, leading to loss of genetic information in the process. This method is inferior to homologous recombination, but during some parts of the cell cycle, homologous recombination is unavailable.

Because very little of our genome codes for proteins the resulting mutation is statistically unlikely to be of large consequence.

If the double stranded break occurs during late S phase or G2 phase, the sister chromatid, which is an identical copy of the broken DNA molecule, can act as a template. A protein called BRCA1 is involved in this form of repair.

Cells have mechanisms to kill themselves when the DNA damage is too severe to fix. When DNA damage is detected, an enzyme called PARP will begin synthesizing a polymer of poly(ADP-ribose) (PAR). This polymer signals to DNA repair enzymes that they should activate. If the DNA damage is repaired the polymer will be degraded.

If the DNA damage is severe enough, the PAR polymer will be very long. The polymer will then translocate from the nucleus into the mitochondria, where it will activate apoptosis-inducing factor (AIF). AIF initiates a form of cell death called parthanatos.

The word parthanatos is genius. It’s comprised of PAR + thanatos, which means death in Greek.