Chronic obstructive pulmonary disease (COPD) is characterised by persistent respiratory symptoms and airflow limitation due to airway and/or alveolar abnormalities. It’s common, preventable, and treatable. It is defined as a post-bronchodilator FEV1/FVC ratio of < 0,70.

The following factors are involved in the pathomechanism:

The mMRC scale grades COPD based on the severity of dyspnoea, from 0 (dyspnoea only on exercise) to 4 (too breathless to leave the house, or dyspnoea when doing nothing).

The CAT (COPD assessment test) score grades COPD based on the severity of all symptoms as well as the life quality. There are 8 descriptions which are graded from 0 – 5 based on how much the patient agrees with the description. A total CAT score of > 10 is considered to equal “severe symptoms”. 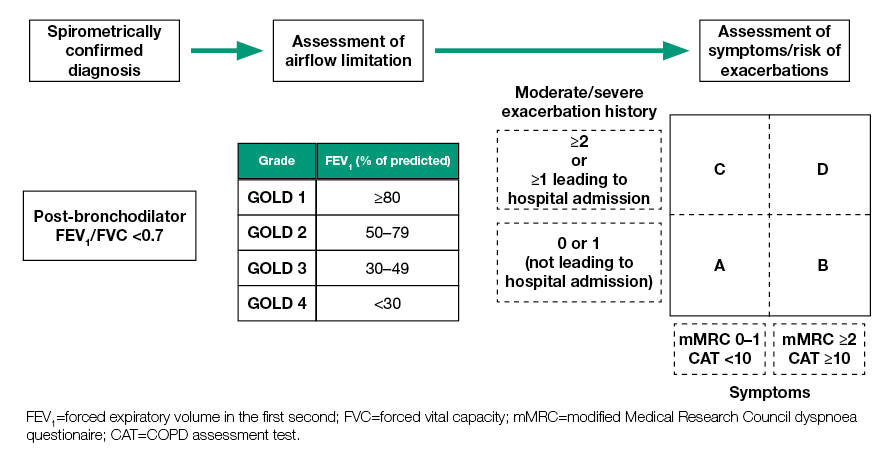 Symptoms are chronic and progressive.

The goal of the treatment is to reduce symptoms and to reduce risk of disease progression, exacerbations, and mortality. The medical treatment depends on the GOLD stage. 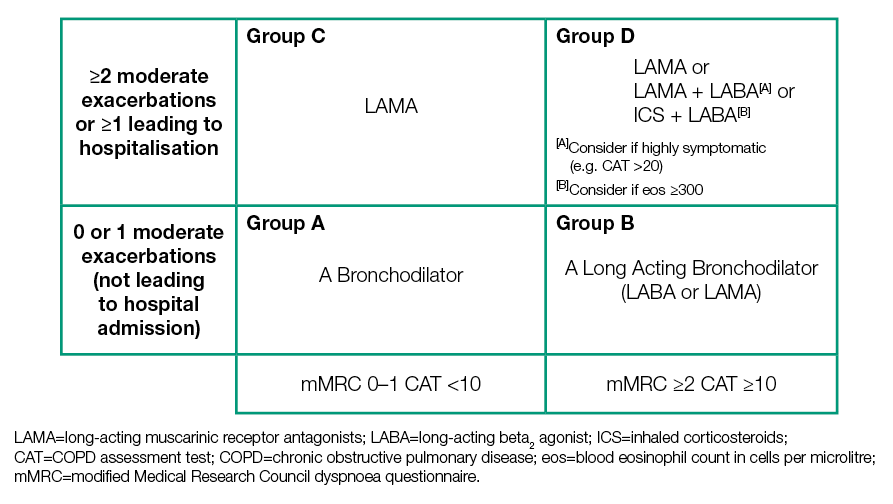 Many drugs are used in the treatment of COPD. This are the most frequently used:

Two or three types can be given in the same inhalator.

Non-pharmacologic therapy includes smoking cessation, long-term oxygen therapy, physical activity, pulmonary rehabilitation, and vaccination against influenza and pneumococcus. It’s important to know that the only treatments in COPD that improve the survival in COPD patients are smoking cessation and long-term oxygen therapy. Medical treatment improves symptoms and quality of life, but it does not reduce mortality.

Long-term oxygen therapy (LTOT) refers to the use of oxygen supplementation for more than 15 hours per day in patients with COPD who also have chronic hypoxaemia. This doubles the mean survival time. LTOT is indicated when one of the following apply:

The contraindications include smoking (explosion risk), poor compliance and adherance to therapy, or if CO2 elevation occurs during LTOT. Nowadays modern O2 concentrators are portable and so the patient is not confined to their homes during LTOT.

Acute exacerbations of COPD are acute worsenings of symptoms in a patient with COPD. It may be caused by viral respiratory infections, bacterial infections, pollution, or stress.

Exacerbations may vary in intensity from mild to very severe and life-threatening. Rapid assessment of the severity is important.

The cardinal symptoms of acute exacerbations are worsening dyspnoea, worsening cough, increased volume and/or purulence of sputum. In severe cases, respiratory failure may occur. If respiratory failure occurs, or if symptoms are severe, or if the patient has serous comorbidities, or if out-patient treatment has failed to improve symptoms, hospitalization is needed.

The diagnosis is based on clinical symptoms. If there are severe symptoms, ABG is used to assess the level of severity.

In mild cases, only an increased dose of an inhaled bronchodilator is necessary, sometimes with the addition of an oral glucocorticoid.

If a bacterial infection is suspected, due to infectious signs or purulent or increased volume of sputum, empiric antibiotics can be given.

Next page:
106. Human immunodeficiency virus (HIV) infection and its consequences