There exists many different types of cell surface receptors:

G-protein coupled receptors are the biggest class of cell surface receptors. Their name comes from the fact that they are coupled (but not bound) to a so-called G-protein on the intracellular side. The G protein is composed of three subunits, one α, one β and one γ.

There are three types of G proteins. The three different types act on different target proteins:

cAMP, IP3 and DAG are so-called second messengers. They are small molecules which are synthesizes in large amounts in response to a hormone binding to a receptor, like we’ve seen. These second messengers will then stimulate other proteins, which will change the cell’s behaviour in some way.

Each G protein coupled receptor subtype is coupled to one of the three types of G protein. For example:

Let’s continue the process from above. We left off at step 6, and our example is glucagon and the glucagon receptor, which is Gs-protein coupled.

7. The α subunit of the Gs protein will stimulate adenylyl cyclase

8. Adenylyl cyclase will convert many ATP molecules into many cAMP

9. cAMP will activate many protein kinase A molecules

10. Protein kinase A will change the behaviour of the cell. If the cell in question is a liver cell, the cell will initiate glycogenolysis and gluconeogenesis, and stop glycolysis.

The only important receptor tyrosine kinase (RTK) is the insulin receptor. It functions similarly to the G protein coupled receptors, except the receptor is not coupled to a G protein. Instead, when the hormone binds to the receptor, the intracellular part of the receptor phosphorylates itself (autophosphorylates).  Let’s look at the whole process.

More about insulin in its topic.

Receptor guanylyl cyclase is special and exists in two forms; one “normal” form which is membrane bound like GPCR and receptor tyrosine kinases, and one “soluble” one, which is not bound to the cell membrane but rather floats around freely inside the cytoplasm.

When ANP or BNP binds to their receptor, the events will be similar to those of the insulin receptor. The only exception is that instead of the intracellular part of the receptor gaining tyrosine kinase activity, it gains guanylyl cyclase activity instead. Guanylyl cyclase converts GTP to cyclic GMP (cGMP), another second messenger. cGMP then activates the so-called protein kinase G (PKG).

NO is a gas and therefore freely diffuses across cell membranes. This is how it can reach and bind to the soluble guanylyl cyclase, which floats around in the cytoplasm. After the binding guanylyl cyclase will convert GTP to cGMP and activate PKG, just like for the membrane-bound version.

The proteins were initially called JAK because they were just a few kinases discovered amongst many, and so were called “Just Another Kinase”. When their importance was discovered they were renamed to Janus Kinase.

After acetylcholine has bound to the nicotinic acetylcholine receptor, the ion channel will open. The ion channel in question is a non-selective cation channel, meaning that it allows all types of cations to flow into and out of the cell, most importantly Na+ and K+. Sodium will flow into the cell and potassium will flow out. This causes a depolarization of the cell membrane, which transmits the signal further.

Type II nuclear receptors are found in the nucleus. They exist in a complex with a retinoid X receptor (RXR), and are bound to a corepressor, a molecule that represses its activity. After the hormone enters the nucleus through a nuclear pore, it will bind the nuclear receptor/RXR complex, which will cause the corepressor to dissociate. The complex will then bind RNA polymerase, which will begin transcription.

Amplification is an important concept in signal transduction, and the reason that many signalling pathways are as complicated as they are is to achieve amplification. The term means how the signal transmitted from only one molecule of hormone can stimulate a very large cell response.

Let’s look at the glucagon pathway as an example. We now that glucagon catalyses glycogen breakdown indirectly. Imagine if the pathway was much shorter, and that the glucagon receptor directly stimulated glycogen phosphorylase. In this case, one molecule of glucagon would bind to its receptor. The receptor would stimulate one molecule of glycogen phosphorylase, which would catalyse the release of maybe 10 molecules of glucose. 10 molecules of glucose is nothing, so this would be a very weak response. 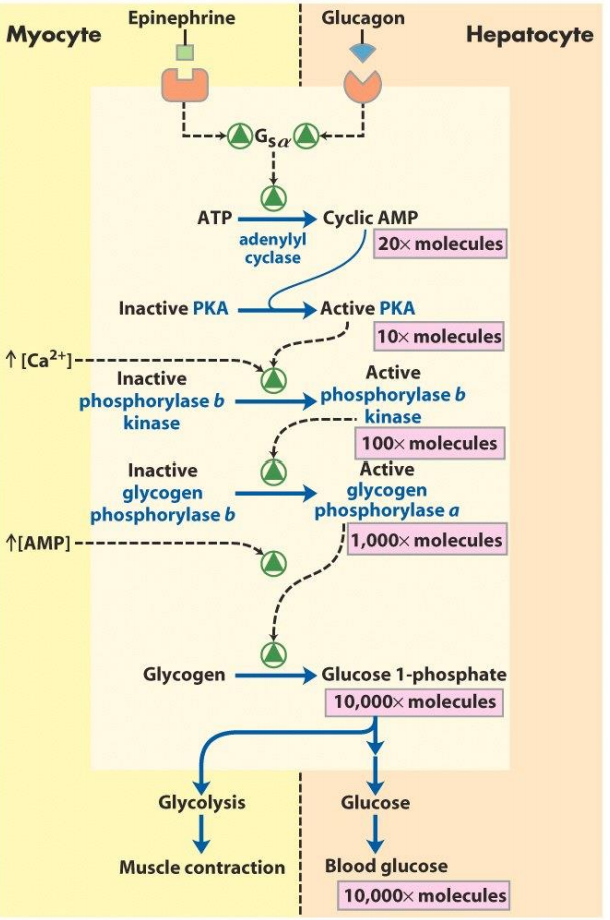 AMP-dependent protein kinase (AMPK) is an enzyme which is activated when cells are low in ATP. The purpose of the enzyme is to prevent complete energy depletion in the cell.

Why is it not ATP-dependent protein kinase?

AMPK is allosterically activated by an increase in intracellular [AMP]. [AMP] is increased as the level of ATP in the cell decreases, either as a cause of exercise or not enough nutrition. AMPK is activated by increase in [AMP] rather than a decrease in [ATP] for a reason.

When [AMP] is high, AMPK phosphorylates many different key proteins, regulating their activity to either increase or decrease their activity, depending on the target protein. The table below shows which processes are regulated by AMPK, and what the target enzymes are: AMPK also affects cognitive functions. It will stimulate feeding behaviour, and inhibit behaviour that uses unnecessary energy. By changing the body’s behaviour to stimulate feeding and stimulate processes which yields energy from energy stores (like beta oxidation), AMPK works to increase the concentration of ATP in the cells of the body.

mTORC1 (mTOR complex 1) is a protein complex comprised of mTOR and some other proteins. mTOR is the core component of this complex, and it is the component with the kinase activity which allows the complex to regulate cell processes. mTORC1 functions as a sensor for nutrients and uses this information to regulate cell growth.

Note that the terms mTOR and mTORC1 are used sometimes interchangeably, even though they’re not the same thing.

mTORC1 is activated by high concentration of nutrients and by growth factors. One of these growth factors is insulin, which activates mTORC1 through the PKB pathway, as we’ll see in the insulin topic.

When activated it stimulates many processes:

The sum of these processes allow for cell growth and proliferation.

mTORC1 is also relevant in cancer development. Many cancers have mutation in a gene called PTEN, which normally inhibits mTORC1.

To speed up this process scaffold proteins can bind all three of these proteins, thereby increasing their proximity to each other and decreasing the time it takes for them to phosphorylate one another.

These scaffolding proteins can themselves be regulated, thereby regulating the activity of the protein kinase cascade.

The best studied scaffolding protein is called KSR. It binds Raf-1, MEK, and ERK and decreases the time it takes for them to phosphorylate one another. 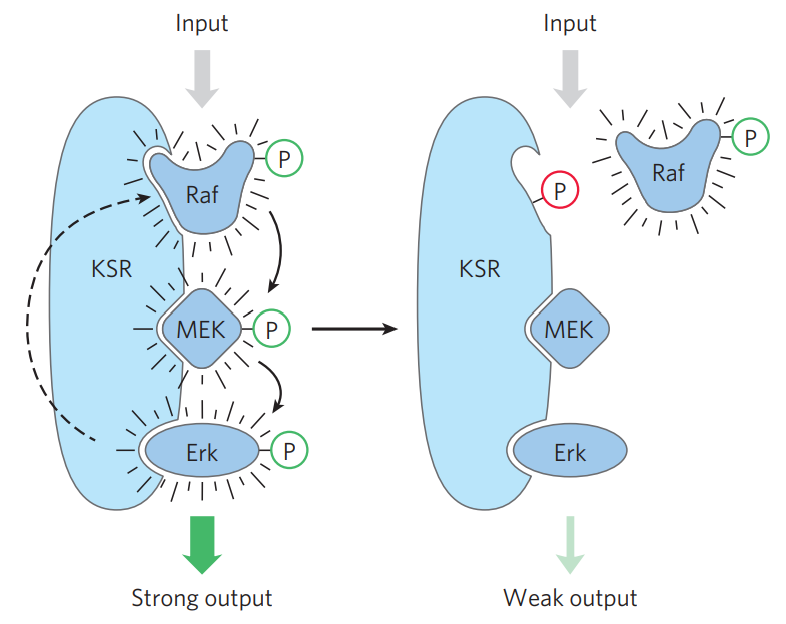 Protein kinase C (PKC) is a kinase which is involved in many different processes. It is activated by Ca2+ and diacylglycerols (DAG). It’s involved in the signalling pathway of many hormones, like oxytocin, angiotensin, histamine, vasopressin, etc.

When these hormone bind to their receptor, phospholipase C is activated. This enzyme cleaves phospholipids into IP3 and DAG. IP3 binds to a receptor on the ER, causing Ca2+ to be released from the ER. The released Ca2+ and the DAG activate protein kinase C.

When activated, PKC is involved in many functions, like learning, memory, regulating cell growth and mediating immune responses.

HIF-1α and oxygen sensing in humans

HIF-1α is constantly hydroxylated at a proline residue by O2, a process which requires vitamin C and Fe2+. After hydroxylation, it binds to a protein called Von Hippel–Lindau protein, or pVHL. The HIF-1α-pVHL complex is then ubiquitinated and broken down.

HIF-1α increases expression of genes that are involved in glycolysis, and lactate dehydrogenase. Because glycolysis doesn’t need O2, but the TCA and oxidative phosphorylation do, glycolysis is activated while the latter two are inhibited. It also inhibits pyruvate dehydrogenase complex.

HIF-1α also modifies complex IV of the oxidative phosphorylation. It switches out one of its subunits (COX4-1) with another subunit (COX4-2). COX4-2 is is more effective than COX4-1 when O2 is low.

The mechanism of how cells use VHL and HIF-1α to sense the oxygen level was the subject for the nobel prize of medicine and physiology in 2019. Cool stuff!

Carbohydrate response element binding protein, or ChREBP, is a transcription factor whose purpose is to stimulate fatty acid and lipid synthesis when the body has enough energy.

Forkhead box other, or FOXO, is a class of transcription factors. The most important of them is FOXO1.

14-3-3 proteins are a family of proteins in eukaryocytes. These proteins bind certain phosphoproteins and stabilize them, the most relevant for us being Raf, BAD, and FOXO proteins.

Nuclear factor kappa B, or NF-κB, is a transcription factor that is involved in cell damage and inflammation. It is activated by several stimuli, like stress, free radicals, cytokines, infection, and UV radiation.

It responds to these stimuli by increasing expression of genes related to immune response and inflammation, amongst others. It is a very central component of immunology and pathology and you’re going to hear more about it later.

Next page:
33. Epinephrine and glucagon