Glucagon is a hormone which is produced by alpha cells in the Langerhans islets of the pancreas. The purpose of the hormone is to increase the level of glucose in the blood between meals.

Epinephrine, also called adrenaline, is a hormone which is produced by cells of the medulla of the adrenal gland. The purpose of this hormone is to prepare the body to periods of stress, as part of the “fight or flight” response.

The biochemical purpose of the hormone is to increase the level of glucose in the blood during periods of stress. Whether choosing to fight or to flee, the skeletal muscles require a lot of energy in the form of blood glucose. The hormone also has many other effects on the body, like stimulating the heart, inhibiting peristalsis in the GI tract, increasing blood pressure, etc., but those functions are more relevant in physiology.

The release of epinephrine is stimulated by sympathetic activation, which occurs during stress. Epinephrine will then travel to the liver, where it will bind to β-adrenergic receptors. This will stimulate glycogenolysis, which increases the blood glucose level. Epinephrine will also act on other tissues:

Both glucagon and epinephrine increase gluconeogenesis and glycogenolysis, and they inhibit the utilization of glucose by the liver. The two hormones achieve theses similar effects by acting through very similar pathways.

Differences between glucagon and epinephrine pathways

Glucagon acts only on the liver, while epinephrine acts on muscle, liver, as well as other tissues.

From receptor binding to PKA activation

Both glucagon receptor and the β2-adrenergic receptor are G-protein coupled receptors. When the hormone binds to them, the receptor binds activates the membrane-bound enzyme called adenlylyl cyclase. This enzyme catalyses the reaction of converting ATP to cAMP. When the level of cAMP in the cell increases, a protein called Protein Kinase A is activated. PKA is what mediates the cells response.

PKA then phosphorylates many different enzymes. This either increases or decreases their activity, depending on the enzyme.

Remember that epinephrine and glucagon are hormones that signal for the body to raise the blood glucose level, while decreasing the amount of glucose the liver uses. With this is mind, it’s easier to remember what PKA affect. PKA activates enzyme related to gluconeogenesis, β-oxidation and glycogen breakdown, while inhibiting enzymes that are related to pathways that use energy for other things than gluconeogenesis, like cholesterol synthesis, fatty acid synthesis and glycogen synthesis. 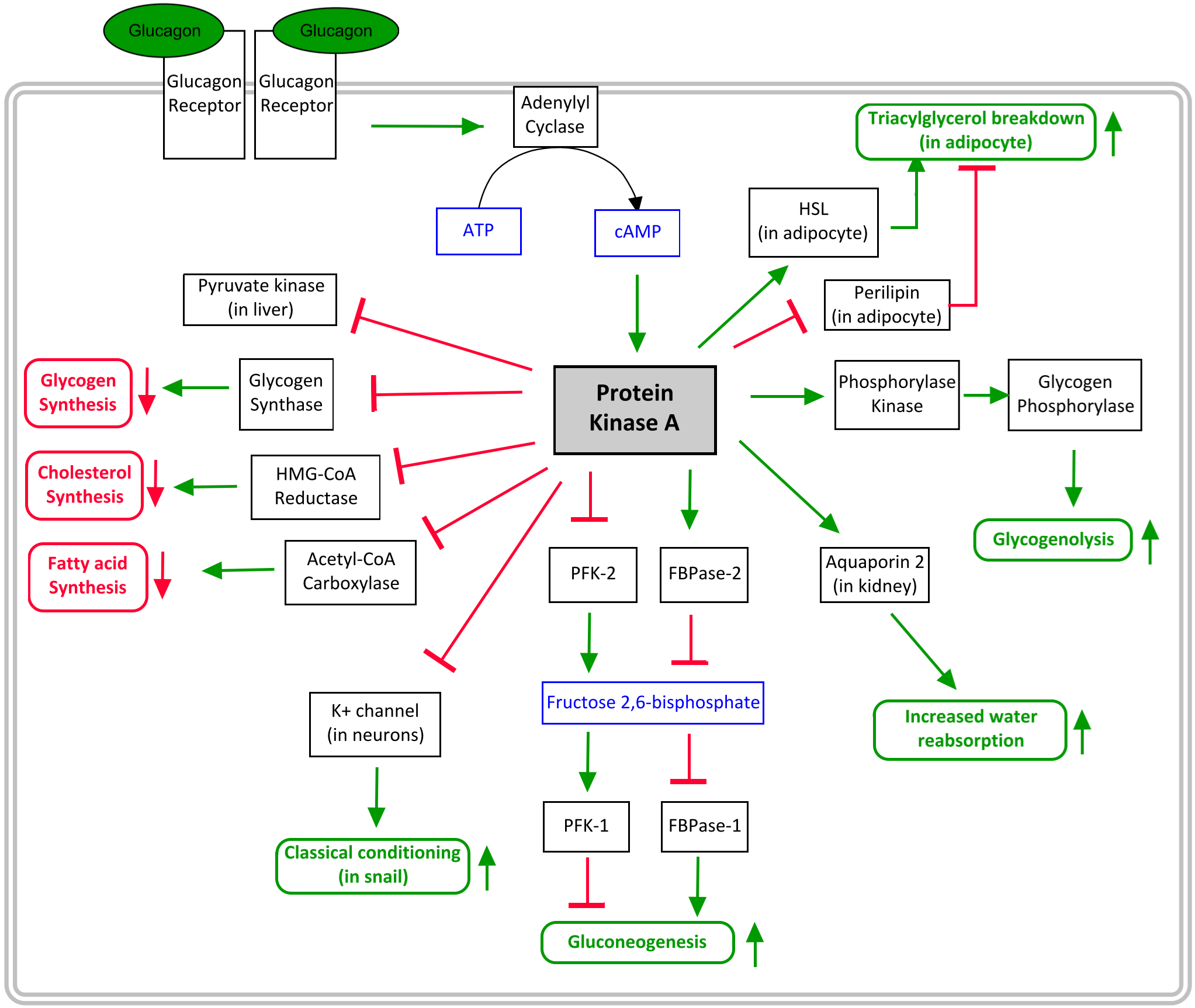 Desensitization of the β-adrenergic receptor

The β-adrenergic receptor can be desensitized, which means that the cell becomes less sensitive to the hormone after being exposed to the hormone for a long time.

2 thoughts on “33. Epinephrine and glucagon”